Fox Analyst Blames Obama for ISIS Beheading: He ‘Stuck His Head in the Sand’ 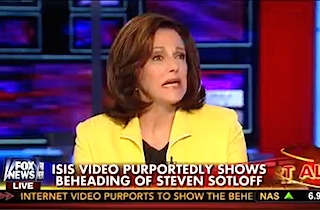 As Fox News’ Gretchen Carlson waiting for a Pentagon briefing on the killing of American journalist Steve Sotloff by ISIS to begin, she spent some time talking to KT McFarland, as Fox News analyst and the former Deputy Assistant Secretary of Defense for Public Affairs under President Ronald Reagan. In McFarland’s view this “sad day” for America is not something that “had to happen.”

Beyond the remaining journalists who are missing overseas, McFarland asked, “Who is protecting the homeland?” She said she would like to hear Obama say, “‘We’re going to secure the border, we’re going to get rid of political correctness and figure out who is here,'” and address the American citizens who are going abroad to train with ISIS and could come back to attack the U.S.

“To me it’s a dereliction of duty,” she said of Obama’s actions surrounding ISIS. “What was this president doing? Well, he was playing a lot of golf this summer, but he clearly was not attending to the defense of the United States.”