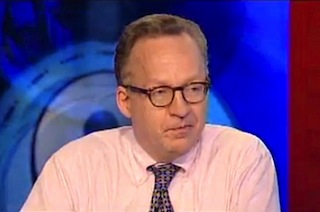 During a discussion on Saturday’s Fox News Watch over whether the media played any role in stoking racial tensions surrounding the George Zimmerman trial, analyst Jim Pinkerton made the case that the media was nostalgic for prior race-related tragedies.

Host Jon Scott prompted the theory by saying, “It has been pointed out that if George Zimmerman had gone by the name of Jorge Mesa, which was his mother’s maiden name, this case may not have gotten the attention it did.”

“That would have been just an underclass back and forth shooting like happens in Chicago ten or twenty times a weekend,” Jim Pinkerton responded. “Zimmerman was badly advised on P.R. to go with ‘George Zimmerman’ because it became a white Hispanic versus a black, then, as Rich [Lowry] wrote in another piece this week, the media gets to pretend America is still Mississippi in the 1950s and the Emmett Till case. It is just not so.”

“The New York Times has been far and away the most guilty of this,” Pinkerton said, “of tying to say, ‘If you don’t hear the race every five seconds in trial, read the New York Times we’ll put it in for you.'”

Judy Miller responded that the country’s fascination with the case was entirely natural, and based more on justice than race: “When Arianna Huffington writes this week, ‘Wall-to-wall coverage is not the way to honor the memory of Trayvon Martin’—Well, you know, this is not about honoring anyone’s memory, this is about a search for justice, and Americans have always been fascinated by such trials.”

“And they’re not getting the coverage,” Scott responded.

Kirsten Powers argued that the case had as much to do with gun laws as race, and that the media’s early fascination with the racial politics of the case obscured this angle:

“It is not to me even the race issue as much as the gun control issue. A lot of people looking at this as, there’s the camp that thinks that George Zimmerman needed to defend himself even though he was tracking this kid down, and then there’s other people like me who think, ‘I don’t want the George Zimmermans of the world shooting me because had don’t like that my hoodie is up.’ I think that this is a serious issue in the country, the gun control issue, people want to see how—how is this going to play out and what happened? I agree. Coverage early on was very speculative and in one direction.”