Fox Analyst: VA Not All Obama’s Fault, Where Was Outrage Under Bush? 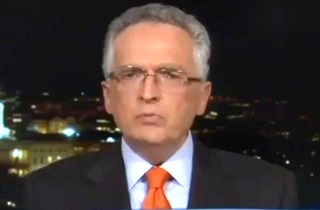 Former Lt. Col. Ralph Peters, a Fox News military analyst, offered a surprising defense of President Obama and VA Secretary Eric Shinseki tonight, after previously defending Shinseki as the media’s “whipping boy” over a long-troubled VA. He told Megyn Kelly that blaming Shinseki and booting him out would be like a patient blaming the doctor for their cancer; he’s just one administrator overseeing the problem, and even if he is at fault, he’s hardly the first VA Secretary who hasn’t done a bang-up job at the position.

Peters was bothered by how everyone calling for Shinseki’s head (including a Democrat here and there) has not gone further to make any concrete suggestions or name any names for who could replace him. He said a lot of the outrage is likely “mock” because people have known about this for years.

RELATED: Maddow: VA Is ‘Problem in Progress’ That Media’s Treating Like a Sudden Scandal

American Legion National Commander Daniel Dellinger argued that Shinseki is at fault because he was supposed to be different and fix the problems, but he didn’t and needs to be held accountable. Shinseki agreed Shinseki hasn’t been perfect, but found it remarkable how this has “suddenly” become a crisis.

“Where was the outrage during the Bush years? I’m not a defender of President Obama by any means, but this is a long-standing problem.”