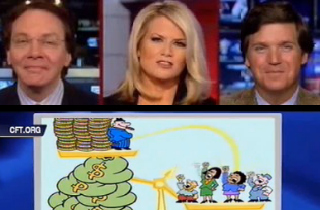 A new pro-union cartoon from the California Federation of Teachers contains a controversial little nugget that drew the ire of Fox host Martha MacCallum this morning. In a panel debate, MacCallum and Fox contributor Tucker Carlson agreed that the video was in poor taste, but Alan Colmes had trouble being offended by a cartoon that made points with which he agreed.

“One of the nation’s largest teacher’s unions is pushing to raise taxes on wealthy Americans with a controversial new cute cartoon thing they put out … I don’t think this deserves a warning, but it’s clearly in questionable taste,” MacCallum said before playing the video that tried to illustrate income inequality in America.

“Did you see what was happening there?” MacCallum said. “The rich person is peeing on the poor people in that video.” She then introduced the two guests, and began with liberal Colmes: “Is that something you want to align yourself with?”

Colmes replied: “I have to work hard on getting outraged at five seconds out of an eight-minute video. It’s a cartoon. It’s a metaphor. Maybe we should be mad at the person to invented trickle down.”

“It’s a classy organization that puts out a video like that,” MacCallum snarked.

Colmes reiterated that the peeing scene was roughly five seconds long, and that it was a metaphor for widening economic inequality in America, but his conservative opponent Carlson was not having it: “That was a valiant effort to defend the indefensible. The most troubling part is … this wasn’t put out by the steamfitters unions. This was put out by the teachers unions. These are the people educating our children. These are the people in whose hands we place the future of our country.”

Colmes responded that “trickle down does not work. Trickle up works. The president is putting money in the pockets of those who will spend it. That’s why he has done small business tax cuts. Trickle-down, we learned since the 80s with Reagan, it does not work.”

“This is a cartoon that uses hyperbole to make a point and it’s a little over the top,” the liberal radio host replied.

“We need a fairer distribution of income in this country,” he replied. “It wouldn’t be a tax raise to go back to the sunset provision which we were supposed to honor over nine years.”

Unconvinced, MacCallum continued to grill Colmes: “So why not just say that? This [cartoon] is pandering to the most base element of class divisiveness.”

“Oh, yes it is!” MacCallum shot back.

“I can’t get all upset about a cartoon,” Colmes concluded.