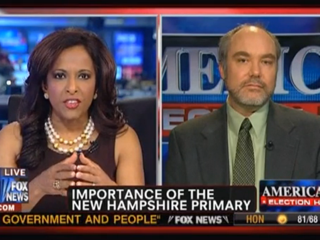 Last week, as America anticipated the Iowa caucuses, some analyses of the state highlighted its demographics as being potentially problematic as far as an accurate representation of the nation’s feelings go. On Fox News today, an anchor rehashed a similar concern about New Hampshire, and while the critique may sound similar, there is a narrow difference between the two takes that merits fleshing out.

Fox News anchor Uma Pemmaraju had St. Anselm University Professor Dale Kuehne on her program today to discuss New Hampshire’s history as a primary state and what to expect from the voters. She put to him a question about its demographics, namely that “it’s got a population of little over a million and the voters tend to be primarily white… and it’s one of the least populated states in the country.” With that in mind, Pemmaraju asked whether “those who suggest that it is not truly representative of the rest of the country” have a point. Kuehne responded that “there is not state that’s truly representative of any other,” but that the charm of New Hampshire was that it was small enough for retail politics to matter.

If the question about being overwhelmingly white sounds familiar, that’s because some on Fox News, notably Bill O’Reilly and Bernie Goldberg, spent the better part of last week being outraged that some reporters, among them Andrea Mitchell of NBC, had raised the same concerns about Iowa. Yes, Mitchell actually used the term “too white,” and said that Iowa had a “rap” among some, rather than using the term “there are those who suggest.” There are semantic differences in the way the issue is presented, and the connotation of a population being “too” much of an ethnic or racial group is far more negative than that of one being “primarily” composed of said group. In Goldberg’s initial review of Mitchell’s report, he actually notes that her claim that Iowa is not representative of the national demographics was “absolutely correct,” and highlights the word “too” as the problem with the report.

But the crux of both arguments is similar, in part because the demographics of Iowa and New Hampshire can, on paper, look similar, when you remove religion from the equation: compared to other states, there aren’t that many people and most of the people are white. Again, in the O’Reilly Factor segment, both anchor and guest argue that New Hampshire gets the same critiques as Iowa. And yet Goldberg counters that no one would say South Carolina is “too black,” and in the context of a colleague asking similar questions about New Hampshire that someone on another network did about Iowa, it is very easy for the casual observer to assume a double standard from Goldberg. Why is it a question from Mitchell about the racial composition of one state unacceptable, while Pemmaraju’s similar query is not?

Goldberg and O’Reilly may answer that, in fact, neither are acceptable, though I doubt they would. And the answer for why is not that there is a double standard, but it lies in that one word, “too,” that assumes that a state can surfeit on a certain type of person, on an immutable trait. The devil in this case is in that one adverb. And while Goldberg makes the point in his commentary, it does get somewhat lost once he says that no one would claim South Carolina is “too black.” He’s right, but what he does not follow up with– because it wouldn’t come up without the context of today’s report on Fox News– is that people would say that South Carolina has a higher black population than the national average, or phrase that fact in a neutral light without using the word “too.” If black Americans in South Carolina (and nationally) have voting patterns that can be traced by their membership in that racial group, then it is a salient fact in discussing South Carolina– just as the predominantly white population of New Hampshire is for that state. But the nuance in tone is worth clarifying, as it is easy to assume that there is no difference between the attitude present in Mitchell and Pemmaraju’s questions, particularly for the casual observer.

Pemmaraju’s report via Fox News below (and for comparison, Andrea Mitchell’s here):