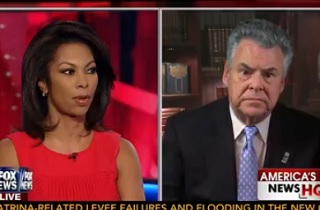 The New York Times‘ in-depth investigation into the attack in Benghazi has stirred renewed debate on the incident, including a narrative from conservatives that the reporting changes nothing about the prevailing narrative on the attack. On Saturday, though, Fox News anchor Harris Faulkner laid down a marker by telling viewers, and Rep. Peter King (R-NY) that the Times report contradicts much of the reporting that has shaped the debate over the tragedy.

Faulkner called the NYT piece “an exhaustive report on what happened in Benghazi, Libya in September of 2012,” and said that “The Times is suggesting that they couldn’t find any evidence that al Qaeda or other terrorist groups had any role in that assault, and suggests the deadly attack was in part due to anger at an American-made video seen as anti-Islam. This goes against much of Fox News’ own reporting.”

Faulkner then repeated the assessment while introducing guest Rep. Peter King. “Congressman King,” she said, “not only against our reporting, but everything else we knew up until this point. Why?”

As a matter of fact, though, even in the days following the attack, Foreign Policy Magazine reported that “there are no known formal or operational links” between al Qaeda and Ansar al Sharia, and the day after the attack, Ansar al- Sharia put out a statement blaming the attack on the anti-Islam video.

King said that he disagreed with the “premise” of the report, and while he admitted that Ansar al Sharia is “not officially linked to al Qaeda,” King pointed out that “I consider that to be an al Qaeda affiliate,” and that “this is an al Qaeda-supporting organization and there are links between the two.”

Faulkner then offered an explanation for the contradictions between Fox’s reporting and the NYT report, pointing out that “These were excerpts from six chapters of a book that are coming, and sometimes you have to question, when somebody is trying to sell a book, what goes in it.”