Fox and Friends Asks Cal Ripken, Jr. If He’s ‘Concerned About The Wussification Of America’ 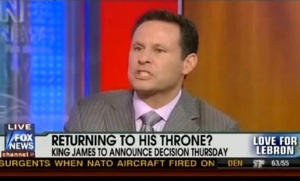 Fox and Friends had on baseball legend Cal Ripken, Jr. this morning and host Brian Kilmeade bravely asked him the question that others have been too cowardly to ask: is he “concerned about the wussification of America.” Turns out that Ripken doesn’t like it and that he’s opposed to “participation trophies” that reward every kid involved in a sport, instead of just the winners. As a parent of two small boys, I actually agree with both Ripken and Kilmeade, but why does Fox and Friends insist on framing an interesting debate in the most banal of terms?

First off, let’s watch the clip which presents the topic in the most the absurdly oversimplified context:

There is a great discussion to be had about the role of sports and competition in raising children in today’s day and age – and the concerning trend that many obsessive parents seen to be overly concerned with the negative effects of their child losing in any sort of competition. But focusing on just one aspect of the overall experience overlooks many benefits of participatory sports. Learning how to win and lose (in addition to teamwork and sportsmanship) are all really valuable skills that come from a healthy participation in sports.

These are the points that are effectively made by Kilmeade and Ripken. And so, while I actually agree with points made in this segment, in my opinion, the producers of Fox and Friends do themselves a disservice by framing the discussion in such simple terms.

What’s somewhat ironic is that, in a different stage of my career roughly three years ago, while working for HBO’s ill-fated “This Just In” project, I wrote and directed a video that is eerily prescient of the following clip, featuring Jessica St. Clair, Stewart Bailey and Jeff Rosenthal. Enjoy the clip below.