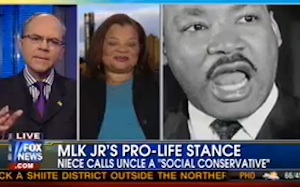 Alveda King, the niece of the Rev. Martin Luther King Jr., and anti-abortion activist, appeared on Fox and Friends Monday morning, and tried to make the case that her uncle really was a pro-life social conservative. Hmm, you might not have read about that in your history books. Guest co-host Peter Johnson Jr. pressed her on the theory.

“Was your belief that Dr. King would do everything in his power to support the rights of the unborn, to support the sanctity of life, and that he was a minister, above all things, a preacherman?”

“You know, my uncle said, ‘Injustice anywhere is a threat to justice everywhere. The negro cannot win if he’s willing to sacrifice the futures of his children for immediate personal comfort and safety,'” King explained. “So that led me to say, a woman has a right to choose what she does with her body. The baby is not her body. Where’s the lawyer for the baby? How can the dream survive if we murder our children?”

But how does Alveda’s claims square with the facts? Apparently not well, according to civil rights history professor David Garrow , who, while not appearing in the segment, strongly disputed King’s claims in a 2010 Salon article. “King was not only not a Republican, he was well to the left of the Democratic Party of the 1960s,” he wrote. “One could make a very strong case that King thought of himself as a democratic socialist. It’s also well-documented that Dr. King was a strong supporter of Planned Parenthood.”

Watch Alveda King argue her uncle really was pro-life — and then share memories of preaching competitions her father and uncle used to have — below, via Fox News: