Fox and Friends Dismisses News Corp. Hacking Scandal Coverage: ‘We Should Move On’ 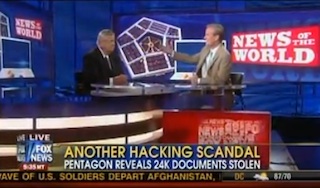 This was a no win situation. If Fox and Friends didn’t touch the massive UK phone hacking scandal currently embroiling Fox News’ parent company News Corp. (and arguably one of the biggest news stories in the world) they’d be criticized. However, the morning show is, after all, technically an entertainment show and not a news program, so you wouldn’t necessarily expect extensive reporting. Yet, even under those difficult circumstances, the segment F&F finally did take on the story today, and was about as bungled as you could possibly imagine, as they clumsily attempted to shoehorn the subject into a conversation of hacking at large.

That noise you hear? That’s the sound of every Fox News detractor in the world unleashing their attack dogs. And you know what? In this instance they aren’t necessarily without good reason.

The segment featured a conversation between Fox News’ Steve Doocy and media consultant Robert Dilenschneider. If Fox News wanted any chance to spare themselves undue criticism, they got off on the wrong foot instantly as both men quickly began talking about how overdone the coverage of the story is and how people should “move on.” Really? Really?!

But that silliness is nothing, absolutely nothing, compared to the massive logic leaps that came next:

DILENSCHNEIDER: And, I would also say, by the way, Citigroup, great bank. Bank of America, great bank. Are they getting the same kind of attention for hacking that happened less than a year ago that News Corp. is getting today?

So, let me get this straight. A News Corp. outlet has admitted to hacking into citizen’s phones and has been accused of bribing politicians and police and this is the same thing as other companies being the victims of computer hackers?! How on earth did you get there?

Fox News has always gotten heat from critics for playing the Victim Card (“We’re the only balanced voice in a sea of liberals who hate us!”) and sometimes that tactic is completely fair. But this is not one of those times. Not even close. News Corp. is not even close to being the victim here. It’s media property is actually the perpetrator and there is nothing any talking head says is going to change that. It’s a huge mistake to even try. By doing so, they’re playing right into everything their detractors want them to.

In the end, no matter what anyone says, Fox News has been covering this story (admittedly less than their rivals, but that should be expected). And, as we’ve pointed out, other American News Corp. outlets have been doing so with admirable doggedness. However, this segment? This was a huge step back.

Yes, a step back. Please, Doocy and Dilenschneider, don’t get that confused with being the victim of a backwards fall.