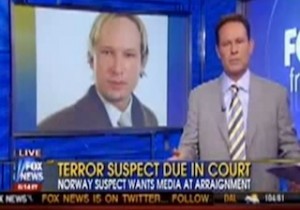 A small yet significant political debate appears to have spawned in the aftermath of last week’s massacre (and car bombing) in Norway that left over 90 individuals dead. The debate centers around the political extremism of the admitted assailant Andrews Behring Brevik and whether his actions were the acts of a crazy person or endemic to someone who is a right-wing extremist. This topic was discussed this morning on Fox and Friends between host Brian Kilmeade and guest contributor Walid Phares.

Some reports have suggested that Breivik self-identifies as a Christian Conservative, and his actions appear to be in protest of Islamic immigration to Norway, or so he has claimed. Despite this, Kilmeade asked of his guest in somewhat of an exasperated and bewildered tone “are you surprised somewhat that western newspapers, in this case The New York Times seem to be jumping on the fact that they are trying to equate Christian extremists with Muslim extremists, the headline today for example “The Killings In Norway Spotlight Anti-Muslim Thought In U.S. What does one thing have to do with the other?”

Phares is quick to point out that Breivik is not just anti-Muslim immigration, but anti-immigration in general, but also makes the broader point that his actions seem to be emblematic of a ego-maniacal crazy person and not just of a Right-Wing ideology. But the same could probably also be said of any extremists, though you probably shouldn’t expect to hear this defense of an Islamic extremist on Fox News (or any other mainstream media outlet in the U.S. for that matter.)