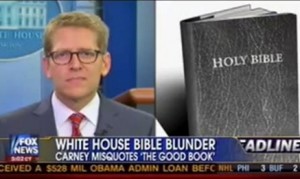 On Thursday morning’s Fox and Friends, co-host Gretchen Carlson took White House Press Secretary Jay Carney to task for a “Bible Blunder” while responding to a question about President Obama‘s “In God We Trust” zinger. Carney quoted the Bible as saying ““The Lord helps those who help themselves,” and while Carlson rightly points out that the phrase does not appear in the Bible, she fails to note that the White House issued a correction hours later.

President Obama criticized congressional Republicans yesterday for wasting time on commemorative baseball coins and reaffirming “In God We Trust” as our national motto, saying, “I trust in God, but God wants to see us help ourselves by putting people back to work.”

At Wednesday’s White House briefing, The Associated Press‘ Erica Werner, citing the President’s quote, asked Carney, “Isn’t it a bit much to bring God into the jobs debate?”

Here is Carney’s reply, as noted in the official White House transcript, released at 4:31 pm Wednesday:

Well, I believe the phrase from the Bible* is, “The Lord helps those who help themselves.”  And I think the point the President is making is that we should — we have it within our capacity to do the things to help the American people.  And that’s why he’s working so hard to get Congress to take action on the American Jobs Act and the provisions therein.  And he — because he believes it’s in the interest of the American people that that action be taken and certainly believes that Americans who are unemployed, who are looking for work, deserve the attention of Washington, the attention of Congress as well as of the President in their policymaking decisions.  It’s a number-one priority for him, getting the economy growing faster and getting the economy creating more jobs.

Now, he was obviously making this particular reference in the context of inaction by the House of Representatives, which has spent time on issues like commemorative Hall of Fame baseball coins and reaffirming a motto that I don’t think anyone doubted, which is that “In God We Trust” is our motto.  So his point was simply that the House should get busy with matters of great importance to the United States and to the American people.

You’ll note the asterisk following Carney’s quote. At the top of the transcript is a notation that reads “* This common phrase does not appear in the Bible.”

Carlson notes Carney’s biblical gaffe (or was it an homage to Pulp Fiction?), and the phrase’s origin in ancient Greek writings, but fails to disclose the White House’s correction.

“An update now on a story we told you about yesterday. White House spokesman Jay Carney caught in a bible blunder. Carney attributing the phrase “the lord helps those who help themselves” to the Bible but that’s not from the good book. His blunder quickly caught and corrected by the White House a few hours later. The phrase actually comes from ancient Greek writing.”