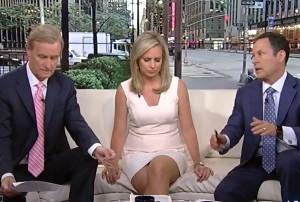 It was either The Captain or Tennille, or neither, who said “Love means never having to say ‘I’m Sorry,'” and by that standard, Fox and Friends really loves their audience. On Monday’s episode of the Fox News morning dramedy, co-hosts Brian Kilmeade and Steve Doocy lamented the horrible media “double-standard” at work in the coverage of convention speeches by Benghazi mom Patricia Smith and grieving Iraq War dad Khizr Khan, because nobody covered the Smith speech at the RNC live, but the networks did cover Mr.Khan’s speech.

As it turns out, like many facts, this one felt truer than it actually was. As we noted yesterday, CNN and MSNBC both carried Patricia Smith’s speech live, and only Fox News did not. On Tuesday morning, Brian Kilmeade noted the fact that “there were some networks that carried the Pat Smith speech live,” by which he meant every news network except Fox, and that Fox “carried neither” the Smith nor Khan speeches. Then, Steve Doocy cut in with what had to be the apology portion of the show, right? Not so much:

It’s interesting you should mention looking at media bias.

The point about Patricia Smith would be a fairer one if Hillary Clinton had followed up the speech by engaging in a flame war with her, but, and this might be a better point for Fox to make, Hillary wasn’t even asked about it until more than a week later. When she finally was, she handled the response, whatever you think of it substantively, with care and sensitivity toward Smith.