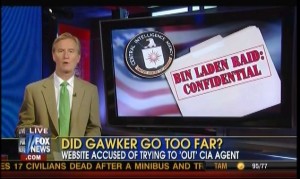 On Friday morning’s Fox & Friends, co-host Steve Doocy slammed Gawker over a blog post that attempted to extrapolate the identity of the CIA agent responsible for tracking and killing Osama bin Laden. Doocy is correct that the site acted recklessly, but along the way, he gets a key fact wrong, makes an unexplainable comparison to the outing of Valerie Plame, and actually shows a photograph of the man in question, in stunning Hi-Def, to millions of Fox News viewers. The Gawker piece in question ran almost a month ago, so whatever harm it might have caused has been helpfully prevented from dying down by Doocy’s brontosaurus-like news reflexes.

The seed of this controversy is a nearly month-old Associated Press story about “John,” the CIA analyst responsible for finding and killing bin Laden. The AP reporters interviewed “former and current U.S. intelligence officials,” on condition of anonymity, from which they gleaned this key bit of information:

After Navy SEALs killed Osama bin Laden, the White House released a photo of President Barack Obama and his Cabinet inside the Situation Room, watching the daring raid unfold.

Hidden from view, standing just outside the frame of that now-famous photograph was a career CIA analyst. In the hunt for the world’s most-wanted terrorist, there may have been no one more important.

Gawker extrapolated from that passage that the agent in question was also in several other photographs, using that hallmark of incomplete journalism: the question mark headline.

Early in the clip, though, Doocy blows a key fact in his zeal to include the AP in his condemnation. Interviewing Michael Scheuer, the CIA agent whose bin Laden unit failed to kill bin Laden, Doocy claims that the AP story says “perhaps the guy that was behind it was in this White House photograph.”

That’s clearly not what the AP said, which is why Gawker’s exercise is so reckless. They published speculation based on an assumption. Ironically, Gawker would be in the clear had they actually confirmed that “John” was the man in the photos. They would actually have been doing the man a favor. If John Cook can figure out who the guy is, so can al Qaeda, and this would have alerted him to exposure that had already occurred. Instead, they’re just thinking out loud, and drawing attention to a guy they admit “could be a random staffer who happened to be in both locations.”

But the fact is, the AP story said the man was not in the photo, and without evidence to the contrary, Gawker shouldn’t have speculated about it. A question isn’t a story. The answer to the question is a story.

Doocy and Scheuer also try to rewrite history, claiming that Gawker’s actions are worse than the outing of Valerie Plame. The key distinction they’re ignoring, of course, is the difference between a journalist, whose duty it is to gather, publish, and contextualize information, and high-level government officials, whose duty it is to protect it.