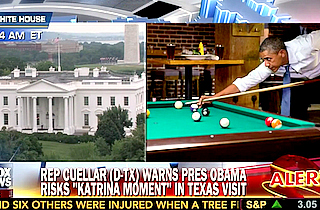 Happening Now’s Martha MacCallum and National Review editor Jonah Goldberg considered a photo tweeted yesterday of President Barack Obama and Colorado Governor John Hickenlooper playing a game of billiards, and agreed it presented terrible optics given Obama’s decision not to go to the border during his upcoming trip to Texas.

“This is a sign that the bubble around the White House is much thicker than people think,” Goldberg said. “Obama’s always liked to cultivate the idea of the ‘No Drama Obama.’ Maybe they think this shows him as an every-man kind of thing.”

“When you look at these pictures, and you think about the fact that the White House wants to avoid a picture at border, and this is the picture we’ve got — no doubt there will be more pictures from fundraisers when they happen tonight — why wouldn’t they cancel some of these appearances?” MaCallum asked. “I get not wanting to go to the actual border, and there’s reasons to think that really wouldn’t be the most effective use of his time. But this optics — it just looks like the bubble is extremely thick.”

The photo in question:

President Obama meets up with Gov. @HickForCO and folks in Denver for some pool and a pint: http://t.co/IJqb4UwSPF pic.twitter.com/RUoep2eMLz