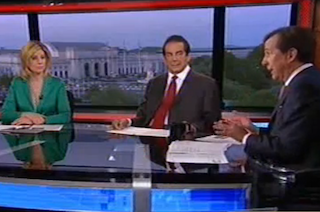 Chris Wallace’s panel defended the obtaining of Americans’ phone data by the NSA on Thursday night, arguing that the program is largely a continuation of similar actions under the Bush administration.

“It’s a program that collected this meta data and allowed the government to sift through it in such a way to identify terrorists, to go after them,” said Stephen Hayes of the Weekly Standard. “In that sense it’s not much different substantively than what the Bush administration was doing.”

“I think the left is being consistent,” Fox contributor Kirsten Powers said. “They didn’t like it under Bush, they don’t like it now. I’ll be consistent with it as well. I didn’t have a problem with it under Bush, and I don’t have a problem with it now, as long as it is done through the FISA court, which was candidate Obama’s position. It can’t just be done without any kind of oversight.”

“As for Gore’s complaint, blanket surveillance,” Powers continued, referring to Al Gore’s earlier tweet that the NSA’s “blanket surveillance” was “obscenely outrageous,” “what other kind of surveillance do you expect them to do? They don’t necessarily know who the terrorists are. That’s why they do the data mining—to go through, to find patterns. These are machines that are doing the data mining. It’s kind of overstating what the situation is, versus people actually spying specifically on your phone calls.”

Even Charles Krauthammer did not take Wallace’s bait to call Obama a 1984-type leader.

“I’m not surprised when [Obama] becomes Commander in Chief and they tell him about the threats out there and his hair stands on end, and he says, ‘Well, perhaps Bush was on the right track here,'” Krauthammer said. “It’s good for the country that a conservative does it and then a liberal and the people understand: this is required.”

“I’m not at all upset by what was revealed today about the phone program,” Krauthammer continued. “It is meta information. Which to get: a) you have to go to a judge; b) it’s sifted by a computer looking for patterns. It’s data mining. If it finds a pattern, they have to go see a judge again and look into it individually. That I think is reasonable.”

Like Hayes, Krauthammer distinguished the NSA’s phone data grab from newly-learned details about the agency’s PRISM program, which allegedly examines content of emails and other online activity.

“I think that the word ‘prism’ has a Bond connotation,” Krauthammer said. “The villain in the lair on the island is working on the PRISM program. It’s kind of spooky tone.”

“We don’t like spooky,” Wallace said as he went to commercial.