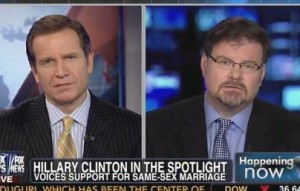 “Nice makeup, soft lighting, it looks like a campaign commercial,” Scott said, after showing clips from the video Clinton recorded for the Human Rights Campaign’s Americans for Marriage Equality initiative.

Goldberg took Scott’s assessment one step further, saying it looked to him like the “wedding scene from The Godfather, a little ominous looking.” He asked, “what private citizen comes out with this kind of highly-produced video unless they’re planning to run for office?” Goldberg called it a “weird choice” for her to deliver something that looked like a “campaign commercial” when “it’s not like she doesn’t have a Rolodex full of reporters that could ask her softball questions” that just happened to include the gay marriage issue.

Goldberg continued to question the political benefit of Clinton making a bold stand on gay marriage, noting that her ability to stay above politics during her time as secretary of state is precisely what has kept her so popular. “She hasn’t had to get down into the partisan muck the way a lot of cabinet officials have, the way a lot of prominent Democrats have.”

Both men agreed that Clinton was making a politically risky move by declaring her support for same-sex marriage as her “first shot out of the cannon,” pointing to a recent Fox News poll that shows an evenly split electorate on the issue. Scott referred to an even more recent Washington Post-ABC News poll on the issue that shows 58% of Americans in favor of gay marriage as an “outlier.”