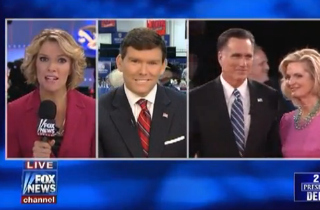 The focus of Fox News’ immediate post-debate reaction was largely on the surprisingly “confrontational” nature of tonight’s town-hall-style debate, President Obama’s newfound confidence and aggression, and Mitt Romney’s seemingly botched attempt to go after the president on his administration’s handling of the attacks on the U.S. consulate in Libya.

Co-anchor Megyn Kelly‘s initial assessment of the debate focused on how the two candidates became, at times, aggressive with one another by “getting into each other’s faces, spaces.” She also noted how the Obama campaign followed through on its promise of a more “aggressive” president in this debate. Kelly also suggested that the questions about equal pay for women, abortion and contraceptions might be seen as “pandering to women.

Kelly’s co-anchor Bret Baier agreed that the debate seemed a lot more “confrontational” than expected, calling it an “ideological game of chess.” Baier also noted what he saw as several “redirects” by both candidates attempting to paint themselves as centrists while deriding the other.

Baier also fact-checked the president’s claim that he had called the Benghazi attacks a “terrorist” act from day one. “He said, ‘No acts of terror’ at the end of the speech, not specifically speaking about Benghazi, but saying generically, ‘No acts of terror will ever shake the resolve of this great nation, alter the character or eclipse the lights of the values we stand for.’ He was asked repeatedly later on Univision, was it terrorism, and he said the investigation was still going.”

Panelist Brit Hume added that moderator Candy Crowley‘s “correction” on Romney’s claim that the president never called the Libya violence a “terrorist act” was akin to a ref coming out and throwing the flag down. “That’s going to help the president,” Hume said.

He then said that Romney missed a “tremendous opportunity” to make a “smart move” by not responding that “if you [Mr. President] thought on the Monday after that this was an act of terror, why did your U.N. Ambassador go out several days later on five Sunday television shows and say the best information you had was that it was all reaction to that movie?”

Final panelist Chris Wallace declared that both Romney and Obama were “wrong” in their responses to the Libya question. But as to who won, Wallace remained unsure:

If you favored one guy or another, you had plenty of proof. I thought Romney’s best moments were when he was laying out the record of the Obama administration on unemployments, on debt, on poverty, on median income. I thought Obama’s best moments were when he basically said Romney favors the rich, and he talked about the fact that he thinks it’s okay for him to pay 14% when a lot of middle-class people pay a lot lower, because, of course, Romney is paying capital gains taxes. Overall, my reaction, I think it certainly stopped the bleeding of the Obama campaign.”