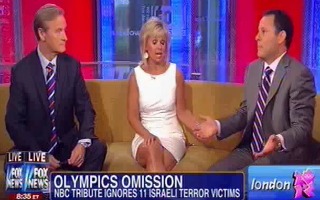 On Monday, the Fox & Friends hosts weighed in on the controversy surrounding NBC’s decision to edit out a portion of the Olympic opening ceremonies for American audiences which was described as a tribute to terror victims. Brian Kilmeade said he thought that the opening ceremony conspicuously avoided noting the victims of the 1972 Munich attacks and that was because the International Olympic Committee was attempting to placate Middle Eastern nations that would not appreciate a tribute to the Israeli athletes killed in that attack.

The hosts of Fox & Friends recapped NBC’s decision to cut the tribute to terror victims. They wondered why it was inappropriate to carry the tribute because, in their estimation, it was as much a tribute to the victims of the 2005 London 7/7 bombings as it was to the murder of much of the 1972 Israeli Olympic team.

“If you’re going to have a moment of silence for the people in World War I and World War II, could you at least have it for an Olympic moment that happened in 1972,” asked Kilmeade.

Steve Doocy said that NBC made the decision to broadcast Ryan Seacrest interviewing Michael Phelps instead of the terror tribute in order to attract more viewers.

“It’s all about not ticking off Middle Eastern countries who evidently feel as though that would tick them off – even though the victims were the Israelis,” said Kilmeade.

“Is that really what it’s about,” asked Gretchen Carlson.

“It has to be what It’s about,” answered Kilmeade. “It’s an Olympic moment. 1972 – 40 years to the day – and you say that’s not the appropriate time, but it’s appropriate to commemorate World War I and World War II veterans?”

Carlson agreed with Kilmeade’s assessment. “They could have found a minute to honor…”

“They could have,” said Doocy.

“They could have found a minute to do that,” Carlson concluded.