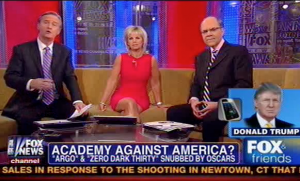 As Donald Trump paid his weekly visit to Fox & Friends on Monday, the show look a closer look at the Golden Globes and the Oscars. Noticing the discrepancy between the two award shows’ recognition of “pro-America” films, co-host Steve Doocy questioned whether the Academy bears a bias.

Specifically, Doocy referred to Argo — which won Golden Globes for best film (drama) and director (Ben Affleck) — and Zero Dark Thirty, whose director, Kathryn Bigelow, was nominated for best director at the Golden Globes, but didn’t get the same Oscar nod.

“Did you think it was interesting that the big winner last night was Ben Affleck’s movie where it showed the United States triumphing over the Iranians in the hostage situation, it was a pro-America film, and then he got a snub by the Oscar folks, no nod for best director,” Doocy asked Trump. “Just like [Kathryn] Bigelow, who has in the past won one, but because her movie, Zero Dark Thirty, was pro-American, showing exactly what it took to finally get Bin Laden, do you think both those films are being punished by Oscar because they’re pro-American movies?”

“I don’t think so,” Trump replied, praising Affleck’s job as director. Though it was terrible that he was “snubbed.” To that point, Gretchen Carlson noted that it’s interesting to see the differences between the Golden Globes and the Oscars because “people get credited in different ways.”

Trump also noted that the Golden Globes have become “bigger,” giving credit to his employer, NBC, for “building it up.”