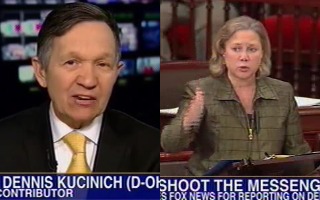 “I’m sensing a trend,” Brian Kilmeade began. “It seems as though every third word from Washington these days is about Fox News in a negative light.”

Kilmeade scolded Sen. Landrieu for insinuating that the American public is being deceived about the nation’s debt and deficit, and only Fox News is concerned about what she claims is a nonissue.

“I am not going to keep cutting the discretionary budget, which, by the way, is not out of control despite what you hear on Fox News,” Landrieu said on the Senate floor on Tuesday.

Earlier in the program, they interviewed Kucinich about a number of topics including Landrieu’s comments:

“You have to understand that Sen. Landrieu represents a state that still has a lot of needs with respect to the oil spill and hurricanes, and so you’ve got to be careful about advocating cutting spending that may actually result in your state getting hurt,” Kucinich said. “I think it’s really about her concerns about the needs of Louisiana as opposed to whatever the federal budget matters are.”

“Since the very beginning, we’ve been trying to give you the other side that they’re not telling you on the other channels,” Doocy said.

They noted that Landrieu acknowledged on the Senate floor in that same speech that entitlement programs do need to be reformed.

“I remember being on this couch during the Clinton years, and I don’t remember Bill Clinton ever saying, ‘you know, if Fox News would just got in line with the rest of the media, I could get stuff done,’” Doocy noted.