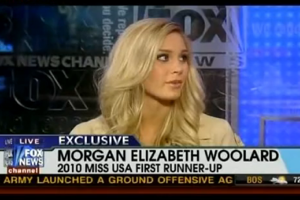 Since the public apparently loves events where scantily-clad women walk around in silence for two hours and then get 30 seconds to talk about how much they love world peace, the Miss USA Pageant is still being talked about two days later. The pageant’s runner-up, Miss Oklahoma Morgan Elizabeth Woolard, visited Fox and Friends this morning to talk about how unfair it was that she had to articulate an opinion on an actual issue, and not, like winner Rima Fakih, “Facebook and MySpace.”

Last year’s pageant filled up a good month’s worth of the news cycle thanks to Carrie Prejean and, seemingly in the hopes of replicating that proud moment in cable news history, the F&Fteam are investigating whether Fakih, the first Arab-American Miss USA and one-time morning zoo pole dance champion, deserved to win. Woolard seems to think so, although Brian Kilmeade in particular showed concern that she was fed a question on the Arizona immigration law– which she answered quite intelligently, for a beauty pageant contestant!– to make sure she didn’t win.

When Woolard noted that she was expecting the question and fully prepared to answer it, Kilmeade asked: “Why were you expecting the question?… Do you feel as though that maybe they wanted to make sure you didn’t win, asking you a question that there’s no way to win because it’s so polarizing?” It is polarizing, she admitted, but explained that she believed part of the job was answering difficult questions. “I think you need to know what’s going on in your world and your nation,” she said.

Continuing the barrage of difficult questions, Kilmeade asked her about the deadly combination of “bathing suits and high heels,” and how she can walk in them. “Do you feel that Miss Michigan won fair and square?” Asked a sympathetic Steve Doocy moments later.

To Woolard’s credit, she was gracious in defeat and insisted that she believed the Arizona law question was fair game, though her behavior in being all over Fox News today (she did an online interview and a segment on America Live in addition to this) might belie her words. Aside from her personal actions, however, there is something concerning about the fact that (a) the Fox and Friends crew seem to be setting up an alternative universe where the real Miss USA is a pro-states’ rights, anti-illegal immigration Middle American beauty, and not an Arab-American strip contest winner and (b) they care enough– or think their audience cares enough– to make this competition at all an issue.