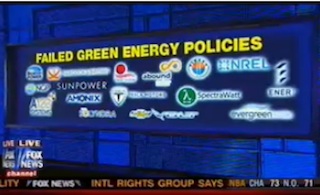 “He’s got no answers as to what he should do right now about gas prices,” Varney opined.

“Stuart, yesterday, President Obama went out on the road and talked about all of his energy successes and failed to mention some of the failures,” Eric Bolling observed.

“How about green energy for start?” Varney exclaimed. “Show me a success in his green energy policy! From Solyndra to Beacon Power — you see all of it. Look at the list! Long list. Those are failures! If there has been an increase in juice, energy supplied from green sources, it’s minuscule and it’s not doing anything for our overall energy situation!”

The segment appears to imply President Obama’s advocacy for green energy and reticence towards drilling is the cause for American’s high gas prices. However, most energy experts don’t actually blame higher gas prices on the Obama Administration’s investment in renewables and think the president actually has his hands tied in the near future on what he can do to affect global oil markets.

Steven Mufson in The Washington Post writes “today’s oil prices are the product of years and decades of exploration, automobile design and ingrained consumer habits combined with political events in places such as Sudan and Libya, anxiety about possible conflict with Iran, and the energy aftershocks of last year’s earthquake in Japan.”