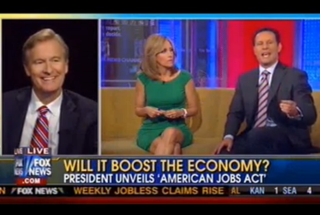 The feedback President Obama’s much anticipated (and much preemptively maligned) jobs speech is raking in has been mostly predictably partisan, with some deviations, but lost in responses from Rep. Michele Bachmann and others seems to be the directness in comments from Fox & Friends‘ Steve Doocy this morning, who suggested the speech amounted to little more than an “infomercial.”

Doocy discussed the speech with co-hosts Alisyn Camerota and Brian Kilmeade, both who found significant flaws with the jobs plan itself. As for the speech, the rhetoric to the group seemed a bit heavy-handed. Playing a montage of the number of times the President demanded Congress pass the jobs bill as soon as possible, Doocy couldn’t help be reminded of “one of those guys in a late-night infomercial,” claiming the President said the statement “18 times.”

As for the substance, Kilmeade noted that it was actually gaining some mild support– but surely more than some expected– from Republican leadership, as House Speaker John Boehner and Majority Leader Eric Cantor said the plan “merited consideration.” That said, both Kilmeade and Doocy seemed concerned about the funding for the bill. “The President is passing the buck when it comes to paying for it,” Doocy argued, suggesting that it should not be the Super Committee’s responsibility to find the money.

The conversation then somehow did a u-turn back to infomercials, where we find out Kilmeade is a “garden weasel” kind of guy, while Doocy can’t stop buying “that special ladder that can bend.” Hopefully the next jobs speech will include ample amounts of both.