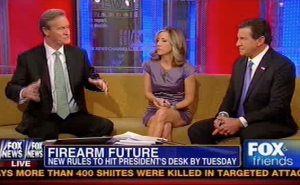 Fox & Friends took a trip down memory lane on Friday morning — back to 2008 when Barack Obama and Joe Biden were vying for the White House and told Americans that they wouldn’t be taking away their guns. Now, with the administration seemingly determined to make changes on the gun control front, with Biden leading the charge, the show’s crew pondered whether the whole thing doesn’t bear some level of hypocrisy.

Majority of people in the country are against restricting the constitutional right to own guns, Steve Doocy said, segueing into the “hypocrisy” of Biden’s past remarks, wherein he said the idea that Obama would take away guns is “malarkey.” Then came the second clip, in which Obama said plainly, “I will not take your shotgun away. I will not take your rifle.”

Not wholly agreeing with her co-hosts, Alisyn Camerota asked, “How is that hypocrisy?” The administration’s said nothing about confiscation, she said, adding that no information suggesting that has leaked.

“They’ve already talked about a national registry,” Eric Bolling countered, to which Camerota noted that the Bureau of Alcohol, Tobacco, Firearms and Explosives is calling for that. The “ATF wants to better be able to figure out, once a gun is used in the commission of a crime, whose it is,” she said.

Bolling asked, “What’s the next step though?” Once all the guns are registered, he said, does that not open up the possibility for them to want to pull guns off the market? Maybe they’ll want to go confiscate AR-15 rifles… or, three years from now, shotguns, too.

Camerota said she understood the slippery slope argument, but added, “That’s not what they suggested.”

What has been suggested and has been a cause of concern, she continued, is executive action on the issue, being able to bypass the Congress if things don’t go his way. “That makes people nervous because it’s unilateral decision,” she argued.