Fox & Friends Don’t Know What a Selfie Is, How to Chair Dance, Jump the Shark, or Tell People Apart 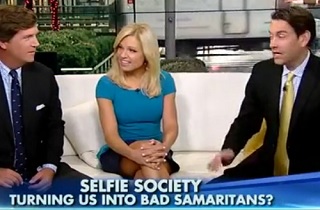 Not every news consumer wants to spend their Saturday mornings being bombarded by intellectualism and heavy social commentary, or even all that much news. A chance look at a random moment of Fox & Friends Saturday demonstrates that Fox News’ flagship morning program has a deep bench that’s more than capable of fitting that bill by teasing a story about “selfies” that contained no selfies, and other similarly entertaining touches.

It all began when a friend told me to watch the hilarious chair-dancing by one of the hosts of this week’s Fox & Friends Saturday, which was, indeed, entertaining, but which also followed a tease about our “Selfie-obsessed society” as it relates to the 71 year-old woman who crashed into a New Jersey Rite Aid. (See? Who says Fox News doesn’t cover New Jersey traffic stories.)

Sucked in by that tease, I stuck around for the promised spectacle of people taking selfies at the scene of the accident, egged on by the Samaritan-baiting chyron, but as the hosts themselves note, there’s really no way to tell what the people on the screen were doing with their smartphones. They could be calling 911, or recording video, or taking photos of the crashed car, but what they certainly were not doing was taking “selfies,” which any Fox Newser will tell you entails taking a photo of your “self” (which may or may not include a twisted wreck).

One of the hosts did point out the incredible detail that the woman who was hit by the car got up and started smartphoning away. One of them was skeptical, at least about what the woman was doing with her phone. “She’s standing there now with her purse. She got back up. Is she also taking photos?”

“Is that her phone out? I don’t see a phone in her hand,” said another.

In fact, there is no phone evident in the woman’s hand, and unless she got thrown several yards by a crashing car, instantly changed her clothes, and got a haircut, that’s not the same woman.

Then, another one began riffing on a Seinfeld reference that no one got, which led another of them to say “He was riding a motorcycle over a shark tank,” an apparent reference to Arthur Fonzarelli‘s famous water-ski jump over an actual shark, netted off in open waters.

Here’s the clip (of F&F, not the Fonz) from Fox & Friends Saturday: