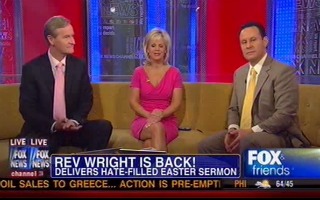 Fox & Friends‘s hosts took some time to examine the reemergence of Rev. Jeremiah Wright over the weekend, and what possible impact the Reverend could have on the political landscape heading into the election season. Steve Doocy related some of the Reverend’s recent sermons which include saying “Supreme Court Justice Clarence Thomas worships some other God. Thomas Jefferson, he referred to him as a pedophile. He said ‘white supremacy is driving world politics.’” The panel wondered if Wright’s return signaled an ratcheting up of racial tensions, but co-host Gretchen Carlson was skeptical.

RELATED: Martin Bashir And Michael Steele Battle Over Whether Romney, Obama Are Treated Equally On Religion

“Remember, in Chicago, this was then-candidate Obama’s minister for maybe 15 years or so,” said Carlson. “Then it came to light that Rev. Wright had said some blasphemous things about the United States and God in general.” Carlson went on to chronicle the public falling out Rev. Wright had with the president and the mutual criticisms the two made of each other over the course of Obama’s presidential term. “But is he back now?” Carlson asks.

“He is back,” says Steve Doocy. “At least he was back for three sermons last week in Charleston, West Virginia. He spoke at the Metropolitan Baptist Church. He had what some have described as ‘three hate filled sermons.” And, with a sigh, Doocy introduced a clip of Rev. Wright over the weekend.

“There are politicians that are making decisions about your life, about your future, about your family, about your children,” said Wright. “And the real tragedy is that they live in a different world from your world all together. There are people in power right now who have opinions about you based on their privilege of skin color.”

“I don’t know what that means,” muttered Brian Kilmeade upon returning to the panel.

Doocy then began to list some of Wright’s greatest hits over the weekend, saying that he preached “Supreme Court Justice Clarence Thomas worships some other God. Thomas Jefferson, he referred to him as a pedophile. He said ‘white supremacy is driving world politics.’”

The Fox & Friends panel then played a clip of Republican strategist Dick Morris who told Sean Hannity last night on Hannity that he “did not believe it was a total coincidence” that Rev. Wright has resurfaced at this particular moment in the 2012 campaign.

“I think that what may be happening here is that there may be a deliberate, orchestrated effort by the Obama White House to promote racial division,” said Morris. He claimed such tensions would drive up African American turnout at the polls in November.

“I don’t know about that,” said Carlson, sounding a skeptical note. “I don’t know what the relationship between those two men is anymore. I do know Rev. Wright has criticized President Obama in the past.”