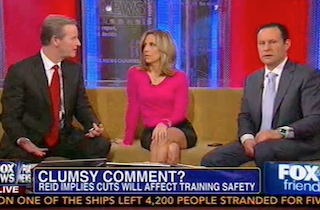 Senate Majority Leader Harry Reid caused a stir yesterday when he brought up the sequester while he was speaking about the deaths of seven Marines during a live-fire training exercise. Fox & Friends took note on Wednesday, questioning whether Reid said the tragedy happened because of the spending cuts. Steve Doocy in particular, called on the senator to apologize.

“We don’t know exactly what happened, but we know it was a violent explosion,” Reid said on Tuesday. “It’s very important we continue training our military. So important. But one of the things in sequester is we cut back on training and maintenance. That’s the way sequester was written.”

Doocy hit Reid for “extraordinarily” suggesting Marines are being sent out without proper training, which is “not true.” It’s “extremely insulting,” Brian Kilmeade agreed, noting how the fallen Marines’ families must feeling.