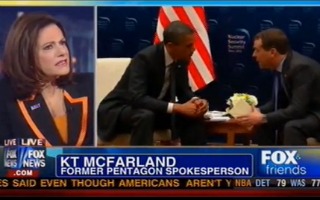 RELATED: Republicans React To Obama’s Hot Mic Incident: What Else Is The President Not Telling Us?

That said, McFarland believes that “we’re getting nothing” out of dealing nicely with Russia. “We’re, in fact,” she continued, “getting worse than nothing. If you look back historically, where have we gotten the best deals for America negotiating with the Russians? Where we’ve been tough and especially over the missile shield. When Reagan was willing to walk away from the Russians on a missile shield deal because he wouldn’t gave up star wars, that’s when he came around and caved.”