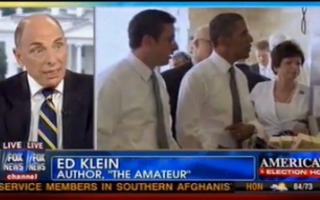 “She had unique power for somebody working inside the White House,” said Doocy.

“We haven’t seen anything like this in modern presidential history,” said Klein. “One person who is the best friend of the First Lady and the soulmate of the President, who is the last person to leave the Oval Office after a meeting, goes upstairs to the family quarters, has dinner with the President. Goes on vacation with them. Has his ear. Is de facto president of the United States.”

“Wow, that’s big,” said Doocy. “Well, let’s talk about her resume. Does she have the resume to have this job?”

No, she doesn’t,” replied Klein. “But what she does have is the trust of Michelle Obama, number one, whom she hired in Chicago, and the President, who uses her as his gatekeeper.”

Doocy then noted that, in his book, Klein writes that Jarrett “has also been responsible for much of the incompetence and amateurism that have been the hallmarks of Obama’s time in office.” Referring to the mission resulting in the successful capture and killing of Osama bin Laden, Klein said that “this is the one time that the President, that I know of, didn’t take her advice,” adding that “he did not take her advice that one time and things worked out very nicely.”

“She’s a very, very liberal person,” he continued. “And she, for instance, urged him to put that mandate on church-related organizations that were required to give free health care for contraceptives. This was against the advice of Joe Biden, the vice president, against the advice of Bill Daley. Bill Daley brought Cardinal Dolan into the Oval Office to try to get the President to reverse himself. And when Valerie Jarrett heard that, she went to the President, blew her stack and Bill Daley was shortly ushered out.”

“More powerful than the chief of staff,” said Doocy. “Isn’t that something?”