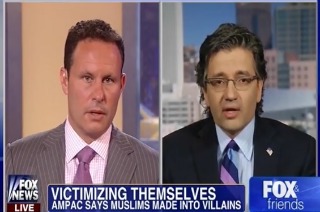 On Thursday night, MD Rabbi Alam, the organizer of the Million Muslim March planned to take place on September 11 in commemoration of the attacks of 9/11/2001, engaged in a heated debate with Fox News Channel host Sean Hannity over whether such an event was appropriate on that day. On Friday morning, Dr. Zuhdi Jasser joined Fox & Friends host Brian Kilmeade where he called Alam one of several “virulent anti-Semites” who should rethink their plans.

“They’re basically a bunch of ‘truthers’ who think that the America is to blame for everything,” Jasser said of Alam’s group.

He said that the group’s leadership are composed of “virulent anti-Semites” who thought that “9/11 was a conspiracy theory.” Jasser added that “American Islamist groups” are also a part of this march, like the Council on American Islamic Relations.

RELATED: Hannity Panel Explodes Over 9/11 Million Muslim March: ‘The Audacity is Beyond Words!’

“These guys are problematic and they’re trying to exploit 9/11,” Jasser asserted. “If they were patriotic Americans and moderates, they would be marching on the courthouse steps of the Ft. Hood trial that’s happening this week saying that we want the death penalty for Nidal Hasan rather than this circus of exploiting the murders and horrific acts of 9/11.”

Jasser said that America has done a lot for Muslims at home and abroad and it is the responsibility of Islamic groups to spread that message. Instead, they are blaming America for the problems facing the Muslim community and further radicalizing people like Hasan.

“He is a virulent anti-Semite who talks about the 9/11 barbarism being a false flag for a Zionist operation,” Jasser said of Alam. “He’s just a whack job. But, at the end of the day, the silence of other American Muslim organizations in marginalizing him, I think, speaks volumes.”