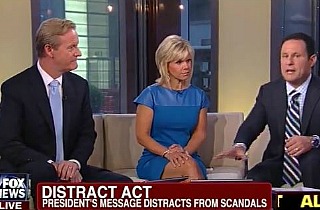 The hosts of Fox & Friends savaged President Barack Obama’s performance during a Tuesday night address to the nation regarding the evolving plan for responding to Syria’s use of chemical weapons. The hosts were unclear about what Obama was attempting to accomplish with that speech, given that his policy toward Syria has been in flux over the last week. They agreed that the proposed diplomatic resolution to the crisis is not feasible.

“I’ve watched it twice now in its entirety — I don’t know why he gave it,” Brian Kilmeade said of Obama’s speech. “I have no idea what it accomplished. And I cannot believe how our diplomacy, even if it works out in the end, how this has all been one stumble into the next mistake, and next thing you know, ball is in your court, Vladimir Putin. Bail us out.”

Gretchen Carlson said that the president had no choice but to give the speech given that he had already announced that he would, even though the president appeared to shift his resolve from military action to continued diplomacy.

Carlson noted that United States policy towards Syria, and the Middle East broadly, is now so ill-defined that it would be difficult to predict America’s responses.

The hosts tried to make sense of what the White House’s desired outcome is in Syria at this point. They agreed that they could not be sure what the administration’s ultimate objective is in Syria today.

“Like him or hate him, President [George W.] Bush made a decision and said ‘here’s what I think, and, you know what? You may hate me for it, but this is the direction I’m going in,’” Carlson opined.

Kilmeade observed that the plan to remove or destroy chemical weapons in Syria is nearly unworkable given the lack of security in that war-torn nation. Carlson concluded by observing that the administration’s decision to go back to the United Nations means that there will be no resolution to that conflict in the near future.