Fox & Friends Hosts Clash Over Constitutionality Of Drone Strikes In U.S.: Not ‘Black And White’ Issue 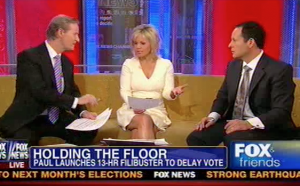 Sen. Rand Paul brought the issue of drones — and use of strikes on U.S. soil — more into the spotlight with this nearly 13-hour filibuster on Wednesday. The Fox & Friends crew, too, debated the topic on Thursday’s show — and hosts Gretchen Carlson and Brian Kilmeade found themselves not seeing eye-to-eye Steve Doocy.

“So many people across the country felt what he was doing was a real public service,” Doocy contended, “because he was saying essentially, ‘Hey, did you know this administration says they can kill Americans on American soil without due process?'”

Kilmeade responded by noting George W. Bush argued that the president of the United States should have the flexibility to act on behalf of the American people, particularly in terms of terrorism. “They could come together on this because I never thought that George Bush was trying to kill, and I never think President Obama is going to go out and kill speeders or kill somebody that would vote against him,” he said.

“The president can’t be a judge and jury,” Doocy countered, leading Carlson to bring up pose a question.

“What about 9/11” she asked. “when they were considering shooting the airplane out of the air because there were terrorists on board? Had it not been for the fact that the passengers brought that plane down, what would we have done as a country?”

“I don’t think it’s quite as simple as saying we would never do that,” she added. “It is an interesting discussion, but I don’t know if it is quite so black and white.”

Yes, it is, Doocy argued. “It is unconstitutional the way the constitution reads.”

“If al-Awlaki is sitting in a restaurant,” Kilmeade pressed, “and we know he is as vile as bin Laden — and possibly more cunning — and he turns up in disguise, and for some reason he walks out and…we can’t get a direct shot at him, we can shoot him out of the sky…I want my president to have the ability to do that.”

Doocy still wasn’t buying it. “If he’s in a Washington restaurant,” he asked, “what sort of imminent threat does he pose?”

“He has operatives in order. He’s got plans on the move,” he said. “He doesn’t actually do the crime. He perpetrates the crime.”

Following Kilmeade and Carlson pondering how rules could be set up for such action, Doocy went back to his original argument. “Given the constitution, given posse comitatus, one man can’t decide who to kill,” he asserted. “There’s got to be due process.”