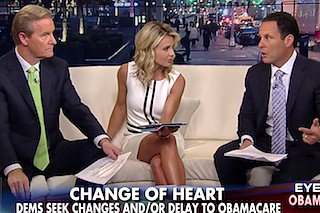 On Thursday morning, the hosts of Fox & Friends praised a gaggle of Democratic lawmakers who have gone beyond criticizing the troubled rollout of the Affordable Care Act exchange website and called for a delay of the individual mandate.

“Democrats are looking at the numbers,” co-host Brian Kilmeade said, “hearing from their constituents, seeing the problem with the website itself—and that it seems unfixable, from the people they have in charge—and they’re saying, ‘We have to delay the individual mandate. This is off to a horrendous start, somebody needs to be fired.’ All this time during the sixteen-day delay in leading up to that, the only guy who was speaking out and saying I’m open to negotiating was Senator Joe Manchin (D-WV).”

“They may be on the White House wall with darts flying at them, but at least they’re stepping up to the plate,” co-host Elisabeth Hasselbeck said. “We have, along with Joe Manchin, we’ve got Representative Henry Cuellar (D-TX), the chairwoman Debbie Wasserman-Schultz (D-FL), Representative Barrow (D-GA), and Senator Sheehan (D-NH).”

“And Senator Landrieu of Louisiana and Begich of Alaska,” Kilmeade said. “Begich and Landrieu are going to have their hands full as they try to win in a very red district that could easily go to a Republican. So they say, ‘Wow, I don’t want to be on the wrong side of Obamacare.'”

“[President Barack Obama] is going to have to respond,” Kilmeade continued. “Easy to tell John Boehner (R-OH) to jump in a lake, but how do you do it to your own party?”