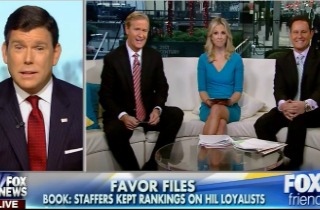 According to a new book, former Secretary of State Hillary Clinton kept a secret file in which she graded her Democratic allies with regard to how helpful or frustrating they had been in facilitating the Clinton family’s political ambitions. Fox News Channel anchor Bret Baier said that the list could be characterized by Clinton’s critics as an “enemies list.” Remarking on this story on Monday morning, the hosts of Fox & Friends said that this story is “waiting to erupt.”

Host Steve Doocy noted that the story involving Clinton’s list of allies and adversaries complete with grades was profiled in the “lefty blog” POLITICO. He noted that the list includes former Clinton allies who “crossed the line” in some way and ended up on the bad side of the political power couple, including Sens. Jay Rockefeller (D-WV), Bob Casey (D-PA), Patrick Leahy (D-VT), Claire McCaskill (D-MO), and Secretary of State John Kerry.

The list apparently dates back to 2008 and the contentious Democratic primary election between her and President Barack Obama. “After that, that list continues, according to this article, and it continues to this day,” Baier said.

Host Brian Kilmeade noted that among the revelations in the book that revealed Clinton’s “hit list” was the fact that she was given an assistant who served as a minder for her and more often reflected the thinking and positions of the Obama White House. “There’s another story ready to erupt, I feel,” he said.

Baier inspired gasps when he reported that McCaskill said in an interview that she “wouldn’t want my daughter around” former President Bill Clinton, even though he was a strong leader. Baier noted that McCaskill “tearfully” apologized for those comments and has been one of the first and most prominent Democrats to come out in support of a potential Hillary Clinton presidential run in 2016.