Fox & Friends Hosts Tell GOP Not to Delay Obamacare: ‘Why Bail Obama Out?’ 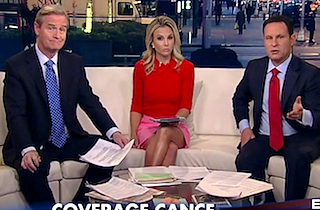 The hosts of Fox & Friends theorized Tuesday morning that President Barack Obama would never have won reelection in 2012 if the public had been aware of the details of the Affordable Care Act, and that Republican lawmakers should not allow a delay in the implementation of the law, as many have calling for, but rather let it fail before the 2014 midterms.

“This is why I say: you cannot delay this,” co-host Brian Kilmeade said, following stories that some people have allegedly had their insurance policies cancelled due to Obamacare. “Republicans should say, ‘No, forget about the delay.’ The president won reelection. If they knew this last summer, the president wouldn’t have won reelection. If they knew he knew in 2010 all these facts, if they knew how ill-planned this was, how bad the website was set up, how little hands on he was, how little detail he knows about his hallmark piece of legislation, he wouldn’t have beat Mitt Romney.”

“That estimate was there,” co-host Elisabeth Hasselbeck said. “40 to 67% of customers will not be able to keep their policy, according to something buried in Obamacare.”

“So why bail him out now?” Kilmeade continued, “and say, ‘Hey, okay. We’ll give that you delay until the midterms are over?'”

“Here’s what’s going to happen,” co-host Steve Doocy said. “In the elections about a year from now, Republicans are going to be able to say, you know what? Obamacare has been a complete catastrophe and we tried to stop it. We tried to warn you.”