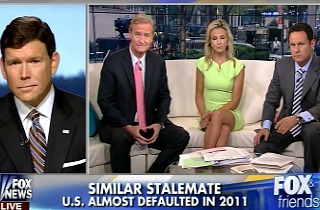 Fox News Channel’s Special Report host Bret Baier joined the hosts of Fox & Friends on Monday to discuss the ongoing government shutdown and the status of negotiations to reopen the government. Fox host Steve Doocy looked at the totality of President Barack Obama’s negotiating strategy and concluded that his White House was attempting to “scare America” in order to force the Republicans into capitulation.

“You know, in my opinion, week one, the president seemed to have the upper hand, clearly the GOP were on their heels,” Brian Kilmeade began. “I think it will be a different week this week, just judging by what I heard over the weekend.”

He cited a clip of House Speaker John Boehner (R-OH) insisting that his Republicans will not negotiate on an increase for the debt ceiling without concessions from Obama.

“A lot of people didn’t think that the speaker was going to come out that firm, actually,” Baier reacted. “But when he did say what he said, it seems like we are headed down this path that is going to be a long time before—probably up against October 17th.”

Doocy set up a clip of Treasury Secretary Jack Lew, who told Fox News Sunday host Chris Wallace over the weekend that the consequences of default would be dire.