Fox & Friends: How Dare Obama Use ‘N-Word’ During Conversation on Racism? 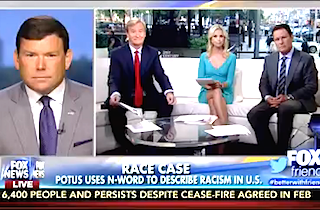 As was first announced last week, President Barack Obama sat down for a candid, in-depth conversation with comedian and podcast host Marc Maron that was released Monday morning. But while the two contemporaries covered a lot of interesting ground, all anyone in the media wants to talk about is the fact that the president said the “n-word.”

Obama’s decision to un-censor himself on the uncensored podcast that takes its name from the acronym for “what the fuck” was a hot topic on Fox & Friends this morning, where Brian Kilmeade introduced the clip in question by saying, “I did not know this, but one of the hottest podcasts in the country is WTF with — I think his name is Greg Maron?”

“It’s Marc Marone,” Steve Doocy added, incorrectly. When Fox proceeded to play a few seconds from the podcast, they bleeped Obama’s use of the word:

“He doesn’t just say ‘n-word,’ he actually uses the word,” Doocy explained to viewers, in case they didn’t get it yet, predicting that “people will be talking about whether or not it’s appropriate for the president to use the ‘n-word’ and whether or not it is beneath the dignity of his office.”

In response to the “salty” language, Fox’s Bret Baier admitted that Obama has the “prerogative” to “say those things when talking about racism from his personal knowledge and has a unique perspective, obviously, as the first African-American president.” But at the same time, he said “it will raise some eyebrows and you’ll probably have the White House respond.”

“I think many people are wondering if it’s only there that he would say it,” Elisabeth Hasselbeck added. “And not, perhaps, in a State of the Union or more public address, if he’s only doing this because he feels, you know, cloaked in the podcast, that he felt safe to do it there.”

In a later segment, Doocy invited two black commentators, liberal radio host Garland Nixon and conservative contributor David Webb, to weigh in. While Nixon defended Obama’s use of the word to start a conversation, Webb unequivocally denounced it, saying, “it is beneath the office of the president.

“We have overturned racism,” Webb suggested. “There are always going to be racists, and that’s a difference.”

Echoing Hasselbeck, Doocy again wondered aloud, “Is it okay for him to stand in the briefing room in the White House and do it, in front of a joint session of Congress with State of the Union? Should he use that word there if he wants to talk about racism?”

What Hasselbeck, Doocy and others are apparently refusing to grasp is the context in which Obama used the word. He wasn’t flip about it and he certainly did not use it pejoratively. And despite what Webb indicated, Obama did not use the word to imply that there has been no racial progress in this country.

The president clearly thinks it’s a good thing that racists know it’s not OK to go around screaming the “n-word” at people, but he was emphasizing that we can’t take that to mean that the problem of racism has been solved. Given the fact that he was speaking on a podcast as opposed to network TV meant that he knew he was free to use language that most adults can hopefully handle.

And in nearly every other context, aren’t the hosts of Fox & Friends that ones who are overly concerned about the “word police” taking away everyone’s right to speak their minds? Just two weeks ago, they were praising comedian Colin Quinn for challenging P.C. culture by talking about race in his act.

If a white comedian should have the right to make jokes about black people, then shouldn’t the African-American president of the United States be allowed to say the word “nigger” while discussing racism in this country? If not, then the P.C. word police really are alive and well in 2015. And you can find them on Fox News.