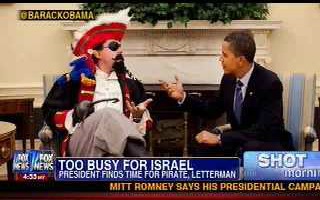 Fox News Channel’s Fox & Friends issued another correction after Thursday’s program. The morning program featured a picture that was sent out on President Barack Obama’s twitter account which showed the president sitting with a man dressed as a pirate in observance of “national talk like a pirate day.” Fox & Friends said that the president had time for a pirate but no time for Israeli Prime Minister Benjamin Netanyahu. Fox & Friends later noted that the picture in question was taken in 2009.

The Fox & Friends hosts showed an image of the president with the pirate and also noted that Obama recently attended a Manhattan fundraiser with artists Jay-Z and Beyoncé. “All that stuff, and yet, Israeli Prime Minister Benjamin Netanyahu is still waiting for that President meeting with Mr. Obama, remember that the White House said he was too busy to meet with him,” said Steve Doocy.

The chyron which captioned the image reinforced the notion that Obama was shirking his official duties as President of the United States. “Too busy for Israel: President Finds Time For Pirate, Letterman,” the chyron read.

Shortly after the broadcast, Fox & Friends tweeted this correction:

This comes after Fox News Channel’s morning program has had to issue a number of corrections in recent months for broadcasting factual inaccuracies or errors. The Washington Post’s Erik Wemple documented a number of them last week.