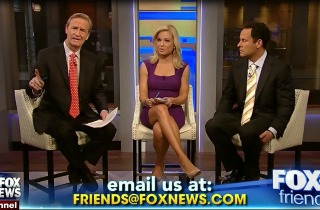 The hosts of Fox & Friends had a message for Democrats on Wednesday: Don’t “cry wolf” about racism. After playing a portion of a clip of a Democratic member of Congress calling Supreme Court Justice Clarence Thomas an “Uncle Tom” and asserting that Senate Majority Leader Mitch McConnell (R-KY) harbors racial antipathy toward President Barack Obama, one of the Fox hosts noted that comments like those of LA Clippers owner Donald Sterling are evidence of what real racism looks like.

Host Steve Doocy began by noting that some Democratic members of Congress, including Rep. Bennie Thompson (D-MS), want the NBA to go further than simply banning Sterling from affiliating with professional basketball for life. “He wants the league to hold people more accountable,” Doocy observed. “What’s interesting is, who’s holding the congressman accountable for things he said on Nation of Islam Radio?”

RELATED: Fox News Asks NBA: Is It Right to Ban Sterling over ‘Remarks Shared in Private’?

On the clip, Thomson said that McConnell’s stated opposition to the president’s legislative goals was a “racist statement.” Thompson went on to assert that Justice Thomas “doesn’t even like black people.”

“How offensive is that?” Fox News Channel anchor Anna Kooiman asked. “Very often it’s the Democrats who say that it’s the Republicans who are racists, but listen to these comments.”

“Being a racist is not a term you should throw around, because when there are cases like what we saw with Donald Sterling where it really matters, you know, you want to take it serious and not cry wolf,” Kooiman continued.