Fox & Friends: ‘Love Liberty?’ DHS Could View You As A Terrorist
Video

Fox & Friends: ‘Love Liberty?’ DHS Could View You As A Terrorist 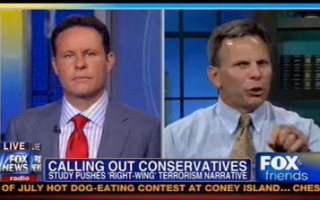 Kilmeade kicked off the segment by asking viewers, “Do you love liberty? Are you in favor of limited government? If you said yes to one or both of those questions,” he added, “you could be qualified as a terrorist.”

“Frankly,” Schaffer explained, “if you have a copy of One Second After, the book that Newt Gingrich tweeted about over the weekend, you could be considered a terrorist by training manuals that are now out. There are real threats out ther — let’s look at Faisal Shahzad who almost took out times square and Major Hasan who killed over a dozen folks at Fort Hood. Frankly, there’s a global jihad going on by radical extremists. We have seen the effects here.”

And while such activity continues, he added, “You have this huge distraction of people being targeted on the right for no real reason.”

Kilmeade, reading from literature distributed by the Department of Homeland Security, noted that “groups that believe that one’s personal and/or national ‘way of life’ is under attack is either already lost or that the threat is imminent.”

“What does that mean?” he asked his guest. “We should look out for people who are extremely patriotic?

“Technically, I guess you or I, if we were out watching fireworks last night enjoying the freedom, could have been picked up for that,” Schaefer responded. “This is insane. This is Orwellian doublespeak. The bottom line is this: all the stuff that they talk about regarding the right wing groups has never come to fruition. There’s no real threat there. They attempted recently to prosecute an extremist group in Michigan and it fell apart because they were entrapped.”

“Let’s remember a couple of years ago in 2009,” he continued. “Janet Napolitano actually said she felt returning veterans from war were a threat. That’s how desperate they were then and I think continue to be now to find this alternative threat to the one that we’re really talking about here — radical Islam.”