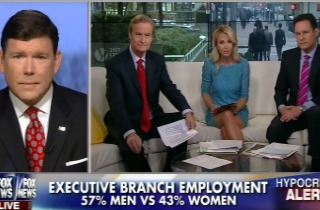 On Tuesday, President Barack Obama will sign two executive orders aimed at advancing the issue of equal pay for women. Some political observers claim that the White House is focusing on gender-related issues as part of a campaign strategy aimed at reviving 2012’s “Republican war on women” theme. The hosts of Fox & Friends on Monday said that the White House lacks credibility on the issue of gender equality because even they pay their female staffers less on average than their male counterparts.

Special Report host Bret Baier said that the new executive order Obama will sign on Tuesday requires employers with federal contracts to list publicly the race and gender along with the salaries of their employees.

RELATED: Rand Paul on Lewinsky Scandal: Dems ‘Have the Gall’ to Accuse GOP of War on Women?

Baier confirmed that, based on a survey by the American Enterprise Institute, women in the White House make 12 percent, or 88 cents on the dollar, less than male White House staffers. Baier added that the White House has never been questioned on this issue, but they believe that gender issues are a “winner for them” electorally.

“When Mitt Romney was running against Barack Obama, they invented the phony war on women,” host Steve Doocy submitted. “It’s embarrassing when you peel back the onion and you look right there at what’s going on.”