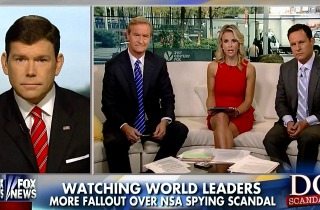 On Sunday, the White House unilaterally halted a National Security Agency spying program which monitored the phone communications of 35 world leaders. On Monday, the hosts of Fox & Friends said that all countries have foreign surveillance programs and that President Barack Obama should “stop apologizing” for the NSA targeting foreign interests.

While some reports indicate that Obama was aware of the scope of that spying program, anonymous White House aides recently told the Wall Street Journal that he was not informed of those spying programs during his presidency.

“The defense is that he was kept out of the loop has been the defense this White House has used,” he continued. “Spying on 35 world leaders — it’s just not good, public relations wise.”

Steve Doocy said he found it troubling that anyone other than the president would be approving of programs that spied on foreign heads of state.

“This all stems from Edward Snowden and all of these documents,” Baier observed. “There is another one out this morning that suggests that the U.S. was listening into some 60 million calls in Spain over a year.”

“I like the Peter King method of embracing it,” Brian Kilmeade submitted. “It’s called the Hamburg Cell. We need to be listening in.”

“He should stop apologizing, right?” Elisabeth Hasselbeck said of the president and his administration. Her co-hosts agreed.