Fox & Friends Outraged Over Saudi Arabia Getting ‘Trusted Traveler’ Status: ‘They Deserve More Of A Pat Down’
video

Fox & Friends Outraged Over Saudi Arabia Getting ‘Trusted Traveler’ Status: ‘They Deserve More Of A Pat Down’ 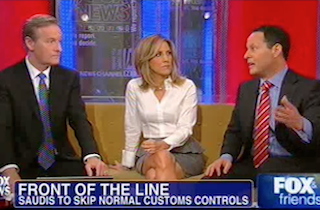 On Thursday’s Fox & Friends, the crew tackled a nugget of news from back in January that went largely under the radar: U.S. Secretary of Homeland Security Janet Napolitano signing an agreement with the Saudi Arabian interior minister to add the country into the Global Entry program, which “streamlines the screening process at airports for trusted travelers.” Trusted? The perplexed co-hosts had trouble understanding the logic.

Most of the 9/11 hijackers were born in Saudi Arabia, Brian Kilmeade noted, and there are “bin Ladens all over” the country. “Anti-Americanism” is part of their curriculum. Yet they’re moving up in status?

The move toward an agreement to add the country to the Global Entry program, which includes Canada, Mexico, and the Netherlands, came in January:

During the meeting, Secretary Napolitano and Interior Minister Prince Mohammed bin Nayef signed an arrangement to begin implementation of U.S. Customs and Border Protection’s trusted traveler program, Global Entry, in Saudi Arabia, and initiate discussions to establish a reciprocal program. Global Entry streamlines the screening process at airports for trusted travelers, allowing customs authorities to focus on those travelers they know less about, in order to more effectively identify potential threats and keep our borders and country secure.

“You’ve got to be kidding,” Steve Doocy reacted. Alisyn Camerota, too, weighed in, noting that “nothing has changed” since Sept. 11. “It’s not as though they’ve made all sorts of reforms and that they now seem more western and seem to love America…It feels political instead of actual progress.”

“It’s not that of all the countries in the region of the last five years they haven’t been most cooperative than most. That’s true,” Kilmeade said. “It doesn’t mean that we can trust their citizens from A to Z. It doesn’t mean — logic would tell you they deserve more of a pat-down than anybody else simply because of their history.”