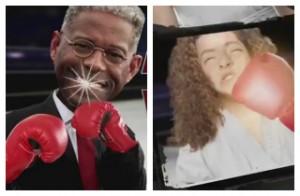 “Allen west fancies himself a fighter,” the ad tells us. “Maybe so. West hits seniors, voting to end Medicare as we know it. He’s whacked women with his votes for huge cuts in women’s health care funding and mauled middle class families by support ago budget plan that would have supported taxes on the rich. Allen west is a fighter all right. But it’s time for us to fight back and knock him out of Congress once and for all.”

As discussion about the ad — which features a boxing glove-clad West punching an older woman at one point — kicked off, Doocy began by asking panelist Jackie Salit, “Jackie, so there is Allen West punching out an old white lady. Can you imagine if it were the dynamic were turned around?” But, rather than speak to hypotheticals, Salit touched upon how as a closed primary state in which Independents are not allowed to vote in the primary, Florida lends to “the atmosphere for partisanship” from the very beginning. Furthermore, she continued, such negative ads are not geared towards the public, but rather, “they’re geared towards the media. Here you are talking about it on Fox News.”

“Allen West actually has been a complete disaster and he has socked seniors and he has socked kids,” panelist Bernard Whitman later added. “The ad is obviously a cartoon, but I find it very hard to feel sorry for self-described ‘Spartacus’ Allen West who says things like ‘Nazi leader Joseph Goebbels would be proud of the Democrat party.'” Plus, given other “outrageous” comments of his, Whitman added, “fair is fair.”

Turning to Republican strategist Anthony Holm, Doocy once again brought up the fact that the ad shows West, a black man, “punching an old white lady.” If, Doocy continued, “it were a white politician punching a, you know, a person of color…”

“One, reverse racism here, because it’s a different standard depending on the color of your skin,” said Holm. “Second, the figures, cartoon or not, are woman beating. That is what is implied. He’s harming women and punching them. Third, I’ll take you back to remember the bullet targets from Sarah Palin in the national outrage, even international outrage. It’s a totally different standard. Now we want to reach out and say, oh, this is acceptable. It’s not. It is totally unacceptable. His opponent needs to lose. We ultimately could beat him at the ballot box.”