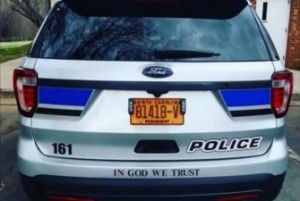 Since Christmas is over, we’re back to the more generalized War on God, in which Mediaite scored a “victory” today when the Associated Press took down photos of a cartoon depicting God as a terrorist. Not all victories are created equal, though, as Thursday morning’s Fox and Friends illustrates.

At issue is the town of China Grove, North Carolina, which is not the one from the song, and was not a MASH unit in Vietnam, Jethro. The town recently decided to put “In God We Trust” decals on their police cars, and China Grove Mayor Lee Withers was on hand this morning to let the Fox friends know that he will defend the town’s new decals against all comers:

Brian Kilmeade: Mr. Mayor, in god we trust is on the police cars. Some are upset about it. What’s your reaction?

Mayor Withers: Brian, I think we’re just excited that we’re getting the word out of the official U.S. motto. It’s nothing to draw controversy to. I think what we’re excited about is we’re just happy to be Americans.

Kilmeade: That’s what you — that’s why you thought it was necessary. Are you surprised this is even controversial?

Withers: I mean I’m not surprised, no. I mean in this day and age, with social media, as things spread, I think that we tend to blow things out of proportion, in a 24-hour news cycle there’s no telling what will hit. But we’re a very reverent, very patriotic community, we fly the American flag, we say the pledge of allegiance before every meeting, and why would we not post the official U.S. motto in our town council, and also on our vehicles?

That’s all well and good, but take a look at the car they put that decal on. Wouldn’t it also be better if their police cars didn’t all say “Escape” on them?

As it turns out, though, the only people Mayor Withers is taking a strong stand against, besides Facebook Jay there, is the Seattle-based Original Motto Project, whose mission was already to restore the original U.S. motto “E Pluribus Unum,” and whose petition now bears a whopping 336 signatures. That’s just slightly more than the 277 Twitter followers the group boasts.

The story wasn’t a total loss, though, because I learned that “In God We Trust” is the official motto of the United States, ever since it was adopted by law in 1956, and which I didn’t know before today because who gives a shit? In 35 years of watching Jeopardy!, it’s never come up, so why does anyone need to know that?

But thanks to Mayor Withers, God and His decals are safe from the locally-sourced sustainable coffee beans I’m sure would be thrown in their direction from Seattle if not for the fearsome figure cut by a God-festooned police hatchback. Sleep well, culture warriors.