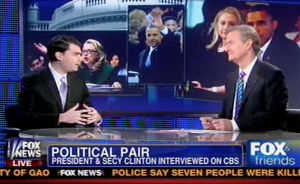 In an interview with The New Republic, President Obama spoke about how the likes of Fox News and Rush Limbaugh can shape the public debate. To nobody’s surprise, Fox Newsers weren’t particularly pleased to hear it. On Monday, Fox & Friends co-host Steve Doocy and Breitbart.com Editor-at-Large Ben Shapiro responded.

“He’s an imperial president, and he has dictatorial tendencies,” Shapiro asserted, cutting right to the chase. He particularly took issue with Obama saying, “I think what we really have to do is change some of the incentive structures so that people feel liberated to pursue some common ground.”

The president is “talking about silencing members of the media that he doesn’t like,” Shapiro adding, noting that Obama “has put this freeze on Fox News for years.” Simply put, “he’s a bully.”

Doocy chimed in that Fox News is doing what the media is supposed to do by challenging the president. “What he’s saying,” Doocy dissected, “is the media is just not liberal enough.”

“I think he wants more than a media pass,” Shapiro responded. “I think he wants people who don’t like him to be quiet.” Fox News and Obama don’t quite have a warm and fuzzy relationship — and the talk about changing the incentive structure “should be scary language for any American who believe in the First Amendment on a fundamental level.”

The pair went on to talk about the joint interview Obama and Secretary of State Hillary Clinton gave to 60 Minutes last night. “There was so much purple love in the room,” Shapiro remarked. “This wasn’t 60 Minutes. This was 60 Shades of Grey.”