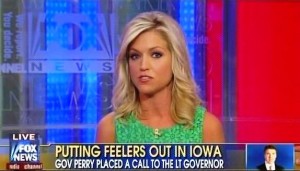 The Republican Party has not outwardly embraced any of its official candidates for the 2012 presidential race warmly, leaving many outside characters to threaten a run themselves. In a discussion on the possible run of Texas governor Rick Perry, the cast of Fox & Friends speculated this morning that he had a strong chance of raising big money among Christians, as the current presumptive frontrunner, Mitt Romney, is “obviously not a Christian.”

Romney, of course, is a member of the Church of Jesus Christ of Latter-Day Saints, a Christian-sounding religious organization if there ever was one. But the comment was made in the context of fundraising– as popular as Gov. Perry may be among as certain sector of Republicans, host Dave Briggs suggested that Perry would have a serious problem keeping up with Romney in the fundraising department. After a look at poll numbers that seemed to shoot down the Fox & Friends suggestion that Perry was popular, the hosts noted that the numbers at this stage of the race were negligible, especially given that Perry isn’t running yet. If he does run, however, whether he can generate money is an entirely different problem than whether he can generate votes.

“There are a lot of people who think he can’t [keep up financially],” added co-host Clayton Morris of Perry in relation to Romney. Co-host Ainsley Earhardt, however, threw Perry a lifesaver. “Well, the Christian Coalition, I think he can get a lot from that,” she explained, “with Romney obviously not being a Christian”– a comment that garnered a muffled grunt of agreement or two. In contrast, Earhardt added, Perry “is always on talk shows, on Christian talk shows, he has days of prayer in Texas.”

Points taken: Perry makes his religious beliefs very public, which may garner him attention from that voting block, while Romney does not– though, judging from this clip, he may need to be a little more public with them. And yes, it is well-known that some more established Christian churches look askance at Mormons. And, perhaps more so, the greater opinion that Rick Perry really should get into the race is conveyed more than well enough, albeit whether it is convincing is another matter (interesting that no one on the panel mentioned Perry’s flirtation with secession). But none of those arguments justify the factual inaccuracy of classifying Mormons as non-Christian, given that the belief in Jesus defines the entire existence of the Church. In its own words, The Book of Mormon exists for “convincing of the Jew and Gentile that Jesus is the Christ, the Eternal God, manifesting himself unto all nations.” That’s a fairly Christian sentiment. It may not be “the right kind” of Christianity– the kind that attracts wealthy donors– but not raking in dollars is certainly a bizarre reasons to classify an organized religion as “non-Christian.”