When I first saw this graphic being shared on Twitter Wednesday evening, it seemed too crude and goofy to be real:

But after some research using TVEyes, it turns out this banner about “defending the homeland” is a real piece of Fox News graphics art. It’s been used exclusively by Fox & Friends for at least the past few days, as an introductory video (and lower-third chyron) for reports on the unfolding undocumented immigration crisis at the United States’ southwestern border.

And how it appeared as a lower-third chyron for various F&F segments, including one with Mediaite’s favorite commentator Todd Starnes: 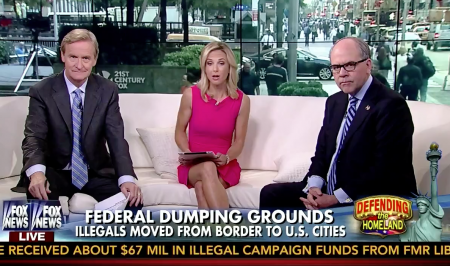 Too many things to unpack here, but let’s try real quick:

1) Apparently people are defending the “homeland” using an iconic French-built statue that literally (it’s written on a bronze plaque) beckons the world’s poor, tired, and huddled masses to come on over to the U.S. of A.;

2) This really isn’t all that surprising a graphic considering the sort of lowest-common-denominator pandering Fox & Friends does on a near-daily basis; and…

3) Fox’s graphics department apparently got very lazy because the image is unmistakably borrowed from the logo to popular video game Bioshock Infinite. To wit: 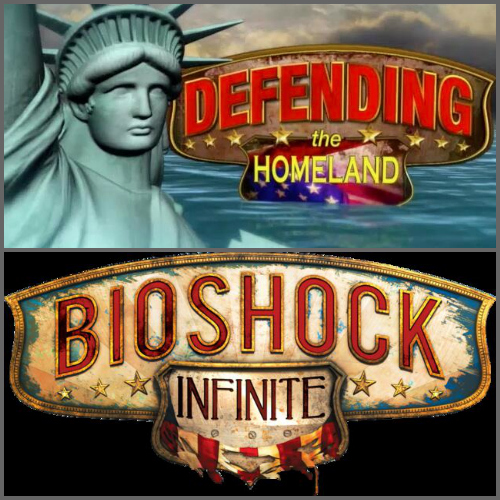 The game’s creator noticed the similarities and posted a picture to his Facebook with the comment: “Glad to help, Fox. Glad to help.”

But what’s deliciously ironic about the Bioshock similarity is that, well… allow A.V. Club to explain:

BioShock Infinite is a game that takes place in a flying city run by a religious zealot named Zachary Hale Comstock. He has populated his city with racist assholes who literally worship America’s Founding Fathers, and he uses American iconography to rile up his citizens in support of a war with all of the heathens of the world that aren’t a part of his flying city.