The Fox & Friends crew had a good laugh this morning over the idea that Illinois State University has decided to introduce gender-neutral restrooms on its campus, to replace the previously-labeled “family” restrooms. Heather Nauert (who incorrectly said the change was happening at Indiana State University) began by saying, “Someone call the P.C. police and you’re not going to believe this one,” before showing the below image of the new signs. Her colleagues’ audible laughter was heard in the background. 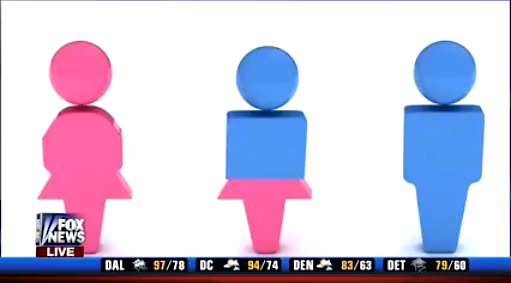 Nauert noted that the change did not come from the students but rather directly from administrators who said they want to create an “all human” restroom. “What do you think of that?” she asked. “You’ve got the man on the top and the skirt on the bottom.”

“I would just sit and stare, I wouldn’t know what to do!” host Brian Kilmeade exclaimed off-screen.

Last week, Michael Shane McCreery, the director and ethics officer in the Office of Equal Opportunity, Ethics and Access at Illinois State University explained the decision, saying, “It evidences the university’s efforts to have an inclusive environment.”

Noting that the change in signage would likely only affect 10 restrooms, he added, “While most people may not even know the sign has changed, I’m anticipating those in the LGBTQ community will appreciate it.”

He likely did not count on Fox taking notice.