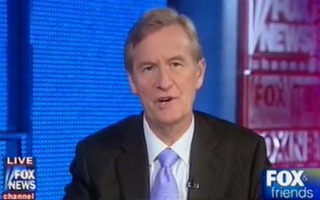 In a campaign speech in Ohio on April 18, President Barack Obama said, “Somebody gave me an education. I wasn’t born with a silver spoon in my mouth. Michelle wasn’t. But somebody gave us a chance.” When Fox & Friends anchor Steve Doocy asked presumptive Republican presidential nominee to respond to this quote, he added “unlike some people” in front of Obama’s quote. Today, Doocy issued a correction.

RELATED: The Dooce Is Loose With The Truth: Steve Doocy Adds ‘Unlike Some People’ To Obama ‘Silver Spoon’ Quote

On an April 19 interview on Fox & Friends, Doocy asked Romney about the “sliver spoon” quote, saying “he [President Obama] had some fiery rhetoric pointed at you yesterday. He said, ‘unlike some people, I wasn’t born with a silver spoon in my mouth.’”

Talking Points Memo reported on Monday that Doocy added “unlike some people” in front of President Obama’s quote.

On Tuesday, Doocy issued a correction:

Last week, President Obama talked about not being born with a silver spoon in his mouth. That was interpreted as a big dig at Mitt Romney. When I was interviewing Gov. Romney on this show, I asked him about it. However, I did some paraphrasing that seemed to misquote the president. So to be clear, the President’s exact quote was “I wasn’t born with a silver spoon in my mouth.” And I hope that clears up any confusion.

While some including the White House have since clarified that the President was not referring to Romney, ABC News reported at the time that “President Barack Obama took a hard-to-miss shot at presumptive Republican nominee Mitt Romney on Wednesday, declaring “I wasn’t born with a silver spoon in my mouth” as he defended his economic policies in Ohio.

Watch the correction below via Fox News Channel: